Corporate insolvencies in France: micro-entreprises in the wave's trough

During the first four months of 2019, the rate of corporate insolvencies in France increased by +0.8%.
This rate was particularly high during January and February, mainly due to the repercussions of the "gilets jaunes" (yellow vests) movement; however, the increasing rate of insolvencies declined in March and April. Nonetheless, Coface anticipates that, despite resilient economic growth, insolvencies will increase by +1.7% over the whole of 2019.

This is due to an unfavourable international environment (caused by less dynamic growth of major partners and increased protectionism) and by significant supply constraints (for instance, production capacity utilisation rates and recruitment difficulties are at their highest since 2007). The main sectors responsible for defaults, with the notable exceptions of the construction and agri-food industries, continued to experience a decline at the beginning of this year. Despite government measures to increase their purchasing power, sectors dependent on household consumption have thus seen more defaults, such as personal service, automobile and non-specialised businesses.


Unsurprisingly, micro-enterprises are the first business types to be affected by the slowdown in growth: the increase in insolvencies can be attributed exclusively to those businesses with less than EUR 250,000 in turnover. Forecasts of declining activity in micro-enterprises are reflected in the increase in those companies’ requests for cash credit and the decrease in investment credit requests. As a result, the average financial cost of defaults has remained on a declining trend. Moreover, the Ile-de-France region was particularly affected at the beginning of 2019, largely contributing to the increased rate of insolvencies.

A two-phase start to the year

By the end of April 2019, 53,000 business failures had been identified over a one year period (Graph 1). The upward trend in insolvencies (recorded since May 2018, when 52,063 insolvencies had been registered over the previous 12 months) continued in early 2019.


Two distinguishable periods can be identified from the first four months of 2019. Firstly, in an unfavourable economic environment, exacerbated by the ongoing "gilets jaunes" (yellow vests) movement, insolvencies rose sharply in January (+9.3% compared to January 2018) and, to a lesser extent, in February (+1.4%). Conversely, March and April showed improvements compared to the same months in 2018 (Graph 2), with decreases of around 4% - a sign of the resilience of the French economy and the decreasing mobilization of the gilets jaunes. Despite this improvement, insolvencies increased by +0.8% compared to the same period last year, confirming the trend of the third and fourth quarters of 2018 (+3.1% in each period), after eight consecutive quarters of decline.[...] 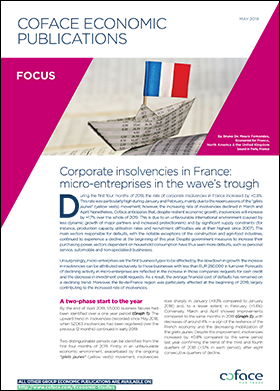