In the previous Coface quarterly barometer published on February 4, 2020, we anticipated that the main risks for the world economy in 2020 would be, paradoxically, of non-economic nature. We included political and environmental risks in this category. Three months later, it is another type of non-economic risk that is tilting the global economy into recession. The COVID-19 epidemic in China, initially affecting a limited number of value chains, has turned into a global pandemic that requires the containment of over half of the world’s population, in more than 50 countries. For businesses, the sudden measures taken by governments to stem the expansion of the virus represent a double shock - supply and demand - that is affecting a large number of industries. The uniqueness of this crisis makes comparisons with the previous ones useless, as the latter have a financial origin (world credit crisis of 2008-2009, great depression of 1929).

In this context, the question is no longer about the countries and sectors of activity that will be affected by this shock, but rather the (rare) ones that will be spared. For instance, the pharmaceutical sector and, to a lesser extent, the food industry are among these relatively spared sectors. In 2020, the world economy should experience its first recession since 2009 (-1.3% after +2.5% in 2019) and 68 countries are expected to be in recession this year against only 11 last year. The volume of international trade will drop for the second consecutive year (world trade down by 4.3% this year in volume, after -0.4% in 2019), the credit risk of companies will be rise sharply and Coface forecasts that corporate insolvencies will increase by 25% worldwide (compared to only +2% expected last January). It would be, by far, the strongest increase since 2009 (+29%), even if economic activity gradually restarts in the 3rd quarter, and without the occurrence of a second wave of epidemic in the second half of the year. This trend would affect the United States (+39%) and all the main Western European economies (+18%): Germany (+11%), France (+15%), United Kingdom (+33%), Italy (+18%) and Spain (+22%). The shock could be even more violent in emerging economies: in addition to the pandemic, which might be more difficult for them to manage, they are also facing the fall in oil prices, as well as capital outflows that have quadrupled compared to their 2008 level. Finally, the pandemic should also have many political consequences, the most obvious being that it exacerbates existing geopolitical tensions in the short term. 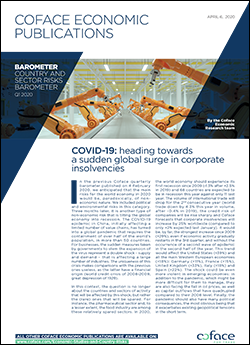