Analyses show that the favourable economic environment was beneficial for the region’s 500 largest businesses, which translated into higher revenues. However, various challenges caused net profits to decrease. Competition is getting more intense and a higher turnover is required to be classified in the ranking compared to previous years.

The Central and Eastern European region experienced continued favourable economic activity in 2018. Similar to 2017,GDPgrowth was also solid in 2018, with average growth rates in the region soaring to 4.6% and 4.3%, respectively - the highest rates since 2008. Compared to other emerging markets, this region is often treated as a safe haven. The CEE economic acceleration was predominantly due to increasing internal demand, with households benefiting from favourable trends on the labour market, such as significantly shrinking unemployment rates over the last five years. The CEE recorded a lower unemployment rate than the EU at the end of 2018: whereas the EU’s average unemployment rate stood at 6.6%, CEE unemployment rates dropped even lower, with the Czech Republic (2.1%), Hungary (3.7%), Poland (3.8%) and Romania (4.0%) having the lowest levels in the region. In parallel with increasing employment, households also benefited from solid wage growth, which contributed to an increased propensity to spend. Finally, yet just as importantly, although activity in Western Europe - the main trading partner of CEE countries - has been slowing down, CEE exports have weakened but remained positive, in large part due to the region’s price and quality competitiveness.

Despite these positive developments, CEE companies have also experienced some trouble. Low unemployment has triggered labour shortages, which have become the main barrier to companies in both daily operations and potential expansion, as reported by an increasing number of businesses over recent years. Growing wages and a pressure for further hikes has increased companies’ operational costs, reducing profits despite soaring revenues. At the same time, increasing wages have not reduced household price sensitivity, and companies have been unable to transfer all cost increases to consumers. Margins are also constrained due to high levels of competition across various sectors.

A period of accelerated demand has affected the solvency of companies in the CEE region.GDP-weighted average insolvencies dropped by 4.2% in 2018, contrary to an increase in proceedings recorded in 2017. Dynamics, however, vary widely across the region and insolvent companies included mostly small and medium-sized enterprises that were unable to benefit even in a favourable macroeconomic environment.

Business conditions were supportive for companies in the CEE region, especially those large firms as confirmed by the CEE Top 500 ranking. Following a series of Country Assessment upgrades in 2017, Coface upgraded Croatia and Slovakia in 2018.

The results of the 2018 ranking of the region’s largest companies reveal that the majority of companies were taking advantage of the continued favourable economic environment. The CEE Top 500 outlines the economic situation at the 500 largest companies in Central and Eastern Europe measured by turnover. Overall turnover at the top 500 companies increased by a solid 9.6% to EUR 698 billion. Whereas 394 (78.8%) of the listed businesses recorded revenue growth (versus 80% in 2017 and 63% in 2016), only 21.2% stagnated or faced a drop. Average turnover increased to EUR 1,396 million compared to last year’s EUR 1,274 million. However, the battle for the top spot is getting tougher. In our edition of the CEE Top 500 companies in 2010, the minimum revenue for a company to qualify for the ranking was EUR 354 million, increasing to EUR 479 million this year (+35.3%). 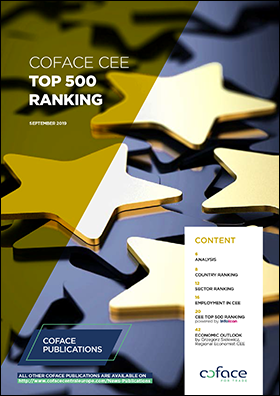