Western Balkans and the European Union: political ties lagging behind economic ones

Despite regional conflicts, the 2007-08 financial crisis, and the 2009-11 eurozone crisis, Western Balkans countries1 have developed a close economic proximity with the European Union via a number of regional and bilateral agreements. However, due to institutional, economic, and diplomatic obstacles, accession to the EU will be a long process. At the same time, due to the region’s strategic importance and with the reinforcement of membership conditions, accession (or a pre-accession status) is likely to happen – especially as membership would divert the region from other interested parties (Russia, China).

After being disrupted by the 1990s wars, the relationship resumed

The severe ethno-nationalist conflicts in the Western Balkans (WB) began in 1991, accompanying the breakup of Yugoslavia, and only ended in 1999, following the intervention of the forces of the United Nations and the North Atlantic Treaty Organization, and with the promise of accession to the European Union (EU). The same year, the Stability Pact for South Eastern Europe (replaced in 2008 by the Regional Cooperation Council) was adopted by the WB countries, as well as by Moldova, with support from the EU, the United States, and other international organisations. Several agreements were adopted under this umbrella related to trade (Central European Free Trade Agreement in 2006), infrastructure (WB Infrastructure Framework in 2009, Online Regional Investment Platform in 2018), and energy (creation of the Energy Community in 2006), among other fields. In parallel, the EU adopted the Stabilisation and Association Process, allowing the signature of Stabilisation and Association Agreements (SAA) between the EU and individual WB countries, which include provisions for future Deep and Comprehensive Free Trade Agreements (DCFTA).

To overcome the slowdown in the relationship and the economic convergence caused by the successive financial and euro crises between 2008 and 2011, the EU made a push to accelerate road, rail, energy, and communication networking, both within the Western Balkans and between the region and the EU. This push saw the adoption of the Berlin Process in 2014 and the Connectivity Agenda in 2015. This subsequently resulted in the Transport Community Treaty in 2017. This treaty, like the others, obliges countries to adopt core EU legislation as defined by the "acquis communautaire"2. In February 2018, the European Commission’s new enhanced WB strategy3 set an indicative deadline (2025) for admission of the two most advanced candidates – Serbia and Montenegro – while flagging specific areas for improvement such as rule of law, security and migration, socioeconomic development, digitalisation, and improving relationships with neighbouring countries. The EU-WB summit in Sofi a, Bulgaria on the 17th May 2018, aims to reaffirm the EU’s commitment towards the WB and the latter’s vocation to adhere to the EU.

1 - Albania, Bosnia & Herzegovina, Kosovo, Macedonia (Former Yougoslav Republic of Macedonia), Montenegro, Serbia
2 - The acquis is the body of common rights and obligations that is binding on all the EU member states
Source: https://ec.europa.eu/neighbourhood-enlargement/policy/glossary/terms/acquis_en
3 - Com (2018) 65 final 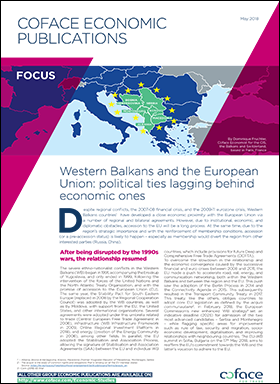