Comparative advantages in tourism and automotive become a double-edged sword

Spain’s productive apparatus is heavily reliant on pandemic-sensitive sectors. Tourism (14% of GDP and 15% of employment) ended 2020 with a 65-70% contraction and should keep severely underperforming at least until mid-2021. The automotive industry (11% of GDP, 18% of exports) has been recovering from the dramatic Q2 2020 contraction thanks to pent-up demand, but contracted by 20-30% nonetheless. Despite the robust government support (ERTE furlough scheme, loans and loan guarantees, specific support packages for tourism (EUR 4.2 billion) and automotive (EUR 3.7 billion)), some of the most vulnerable firms are unlikely to survive. The percentage of vulnerable firms (unprofitable and/or overleveraged) will rise from 20% to around 35%, reaching 65% in tourism, 55% in automotive and 40% in transport. Spanish firms have resorted more to loan guarantees (ES: 9% of GDP, IT: 7%, FR: 5%) than to furlough (at its peak, 15% of Spanish workers were in furlough, FR: 45%, IT: 28%). Thus, Spain is the only major European economy to register a noticeable rise in unemployment (from 13.7 to 16.2% by end 2020), as some of the cost adjustment has come through layoffs. All components of demand are in for a double-digit contraction in 2020 (consumption: -13%, investment: -18%, exports: -23%), before a rebound in 2021 (consumption: 5%, investment: 6%, exports: 13%). Only government spending will have a positive contribution in 2020-2021. A noticeable rise in bankruptcies is expected in 2021, but abnormally high household savings will cushion its effect on demand. With corporate debt set to increase from 127 to 136% of GDP in 2020, firm zombification will be a serious risk without insolvency reforms.

In order to sustain incomes while the economy is in hibernation, extraordinary deficit spending has been the order of the day. Automatic stabilizers (unemployment insurance and other social transfers, income tax, etc.) accounted for two-thirds of the deficit increase, with the rest coming from emergency discretionary measures (furlough, health spending, grants, and tax deferrals). Overall, expenditure rose by 10% and tax income fell by 13%, bringing the deficit to a record 14% of GDP. It will then decrease sharply as the economy recovers and emergency measures are phased out, but it will remain well above normal until at least 2022. Despite the record rise in debt, bond yields have reached record lows and appetite for Spanish bonds has never been higher. This comes from a radical shift in EU/ECB policy. Not only has the ECB fully embraced a “whatever it takes” philosophy by expanding QE by EUR 2.5 trillion, it is now purchasing the bonds of weaker member states in large quantities. Fiscal rules for 2020 and 2021 have been suspended and the European Stability Mechanism’s lending capacity has been boosted (EUR 240 billion), The EUR 750 billion Next Generation EU fund will be strongly geared towards the countries most affected by the crisis, with Spain set to receive EUR 140 billion over the next seven years. As long as this new consensus holds, Spanish debt can be seen as sustainable, not because of good economic fundamentals, but because European institutions will do whatever it takes to keep debt serviceable. A return of inflation would bring this consensus into question. The pandemic will have a broadly neutral effect on the current account, with both imports and exports of goods and services plunging. Banks are relatively fragile, although much stronger than on the eve of the 2008 crisis.

Urgency brings polarized parties to an uneasy equilibrium, but tensions escalate between regional and central governments

Prime Minister Pedro Sanchez of the centre-left socialist party (PSOE, 34% of seats) leads a fragile coalition government, supported by left-wing Unidas Podemos (UP, 10%) and smaller players including pro-independence parties. On the eve of the pandemic, the political landscape was becoming increasingly polarized and fragmented, with the historic two-party duopoly of the PSOE and centre-right Popular Party losing votes to ideological radicals (UP on the left and Vox on the right) and regionalist parties. This resulted in a durable governance paralysis, manifested by recurrent snap elections (four in as many years) and an inability to pass a budget. Under the pressure of the pandemic, a new budget was passed with a wide majority, the first since 2018. Tensions between the central and regional governments arose over mobility restrictions, escalating into a standoff in Madrid. Catalan independentism remains relevant. It is thus hard to say whether the coalition government will fulfil its 4-year mandate. The country is also strongly exposed to European political developments, as European stimulus depends on continued German support.

Cheques are widely used for corporate transactions in Spain. They offer similar legal safeguards under the juicio cambiario (Civil Prodecures Code) in the event of default. The same is true of promissory notes (pagaré), which, like bills of exchange and cheques, are instruments enforceable by law. If unpaid, they are recorded in the registry of unpaid acceptances (RAI, Registro de Aceptationes Impagadas). Attached to the Centre for Interbank Cooperation, the RAI is the country’s most important registry. It records all commercial payment defaults of over €300, thus allowing banks and other deposit institutions to verify a company’s payment record before extending credit.

In contrast, bills of exchange are rarely used commercially. In the event of defaults, they offer creditors certain safeguards, including access to special collection proceedings with instruments for negotiation under the civil procedures code (juicio cambiario). Bills of exchange that have been guaranteed by a bank can be somewhat difficult to obtain, but they do limit the risk of payment default by offering creditors recourse to the endorser of the bill of exchange.

Electronic transfers via the SWIFT network, widely used by Spanish banks, are a fast, fairly reliable and cheap payment instrument, provided the purchaser orders payment in good faith. If the buyer fails to order a transfer, the legal recourse is to institute ordinary proceedings, based on the unpaid invoice. Banks in Spain have also been implementing SEPA standards for euro-denominated payments.

Unless there are special clauses included in the commercial contract, the applicable rate of interest is that applied by the European Central Bank in its most recent refinancing operation (performed prior to the first calendar day of the half year concerned), with an additional eight percentage points. The rate is published by the Finance Minister every six months, in the Boletín Oficial del Estado. The statute of limitations for ordinary claims is five years.

There are no formalities or conditions for the dispatch of a reminder to the debtor, but it is advisable to send a claim to the debtor first. The creditor can obtain guarantees for the payment of the debt.

If no settlement agreement is reached with the customer, the creditor can initiate a legal collection process, using civil procedure law (ley de Enjuiciamento civil).

Exchange proceedings are used for claims based on bills of exchange, promissory notes and cheques. A judge of the first instance (juzgado de primera instancia) verifies that the ‘exchange title’ has been correctly implemented and then orders the debtor to make payment of both the principal amount and the late interests and costs, within ten days. The judge will also order a seizure for security (embargo preventivo) on the debtor’s assets, equivalent to the outstanding amount. The debtor has ten days to dispute the ruling.

If there is no payment received or opposition within the prescribed time, the judge will order enforcement measures. If necessary, the judicial representative will carry out attachment. When claims are contested, a court hearing is held to examine both parties’ arguments and a judgement should be handed down within ten additional days. Although this is time frame that is prescribed under Spanish law, it is rarely adhered to by the courts.

In addition to the juicio cambiario, creditors unable to reach a payment settlement out of court can enforce their rights through a civil procedure (juicio declarativo). Civil procedures are divided into ordinary proceedings (juicio ordinario) for claims of over €6,000 and oral proceedings (juicio verbal) – a more simplified system – for smaller claims. Both proceedings are initiated with a lawsuit served on the debtor.

The claimant is required to explain the facts of his claim and provide all supporting documents – either originals, or copies that have been certified by a public notary – on filing its initial petition. Prior to the investigation of the case, the judge will summon the parties during a first hearing (audiencia previa), using ordinary proceedings, to encourage a conciliation. If this is unsuccessful, the lawsuit will be pursued. The court can then order specific measures to clarify issues or facts that remain unclear, before passing judgment.

For monetary, liquid and overdue claims, whatever the outstanding amount (previously limited to up to €250,000), creditors can now benefit from a more flexible summary procedure. The filing of a petición inicial is directly submitted to the judge of first instance (juzgado de primera instancia) where the debtor is located. After reviewing the supporting documents, the judge can order the debtor to pay within 20 days.

If the debtor does not respond, the judicial representative will inform the judge and request confirmation of the decision in favour of the initial request. The judicial representative then hands down a ruling confirming the conclusion of monitory proceedings, which is transmitted to the creditor. This allows the creditor to contact the Enforcement Office for the next phase. If the debtor disputes the ruling and provides motivated arguments for this within a written statement signed by a barrister and a solicitor, a full trial on the case will be instigated.

Enforcement of a Legal Decision

When all appeal venues have been exhausted, domestic court decisions become enforceable. If the debtor fails to satisfy the judgment within 20 days, the Court Clerk, upon request, can seek out the debtor’s assets and seize them.

Decisions on foreign awards rendered by EU countries benefit from enforcement conditions, such as EU Payment orders and the European Enforcement Order. Judgements rendered by non-EU countries are recognised and enforced, provided that the issuing country is party to a bilateral or multilateral agreement with Spain. If no such agreement is in place, Spanish exequatur proceedings will be followed.

A debtor has the possibility of negotiating a formal refinancing agreement (acuerdo de refinanciacion formal) with his creditors. This agreement must be signed by the court. Within this agreement, the parties are free to write off as much of the debt as they deem necessary.

During these proceedings, the debtor may file for liquidation:

The judicial administration draws up a liquidation plan in order to realise (sell) the assets, consisting of the bankruptcy estate, which is submitted to the judge for approval.

Liquidation in Spain aims to sell the company’s assets. During this phase, the company retains its legal persona. Liquidators are appointed to execute the process and they can also take over the function of administrative body and company representative. The liquidator cannot redistribute the company’s assets among its associates until all of its creditors have been paid and payment demands against the company have been settled. Aggrieved creditors can contest transactions that they believe may have taken place illegally during the allocation of the assets.

The Government approved  Decree and Law 3/20 of September 18, with urgent measures in order to recover the judicial activity after the emergency stage. Recently, Law 3/20 has been modified. In a nutshell, debtors with an approved refinancing agreement are allowed to submit a modification proposal or a new application till 14 March 2021. Companies or freelancers that are insolvent will not have the obligation to request the bankruptcy declaration until 31 December 2020. Until 14 March 2021, the judges will not admit the necessary bankruptcy applications submitted from the state of emergency period to 14 march 2020. The new Law establishes that the debtor does not have the obligation to request a liquidation stage until 14 March 2021, if he has sent a modification proposal of agreement. Regarding the pre-insolvency stage, the new Law gives 6 months (used to be 4 months) to request insolvency since the date of the communication. Finally, to avoid the sure certain of insolvencies, the new Law established several changes in procedures accelerate the treatment of this insolvency process, i.e. deleting trials in incidents matters, trying to use more telematics systems, video conferences, etc. 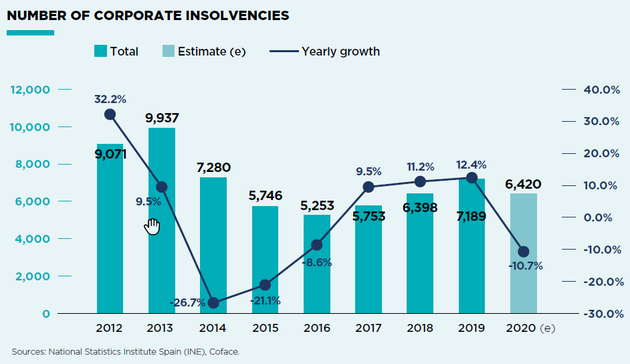