A new deal of cards for emerging markets

The past quarter has been marked by a continued rise in oil prices and capital outflows from emerging markets, fuelling the depreciation of their currencies (see Graph 2, p. 4). The worsening currency crises in Argentina and Turkey this summer (which led us to downgrade their country assessments in the second quarter of the year) are emblematic cases. This trend began in a context of very positive dynamics in the United States’ economy (growth of more than 4% in the second quarter; business confidence at its highest level in 14 years), which surprised both market participants and the US Federal Reserve, leading the latter to tighten its monetary policy more quickly than expected.

As we pointed out in our Q2 2018 Barometer, vulnerabilities specific to emerging countries also explain this trend. The Argentine and Turkish economies are characterised by their large external imbalances and therefore their dependence on external financing. A large part of their public and private debt is denominated in foreign currency. In both Argentina and Turkey, the acceleration in the depreciation of their currencies last summer was aggravated by various factors. For Argentina, President Mauricio Macri’s decision on the 29th August to ask the IMF to disburse funds in advance, out of the USD 50 billion loan granted under the country’s program signed with the international financial organisation last spring, worried Argentine peso holders.

This had the counterproductive ef fect of creating a panic for the Argentinean economy, which was already in crisis, with an expected annual average infl ation rate of, 30% for 2018. Following this announcement, the Argentine peso spiralled by about 13% in one day and the central bank was forced to increase its key rate by 1,500 basis points, to reach 60% per year. This rapid tightening of credit conditions is expected to push the Argentine economy into recession this year (-2.4% after +2.9% in 2017). The continued deterioration of the country’s economy is reflected in our sectoral assessments with the downgrading of six out of thirteen sectors (see p. 9). At this stage, a majority of sectoral assessments for the country are classified as “High Risk” or “Very High Risk”. 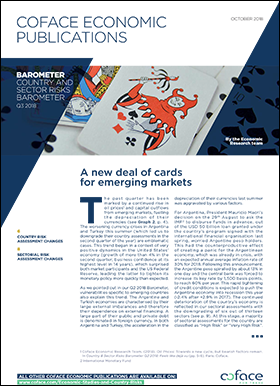 Snemi to publikacijo : A new deal of cards for emerging markets (434,85 kB)